In second year sculpture (2011-2012) at The Art Centre at CTS Adult Visual Arts program, our teacher, Erin Vincent, asked us to pick a piece of paper each from two jars, one was on an era and another was on an artist. From these two, we must conceptualize and create a  sculpture of a head that will be a fusion of both the era and the artist.  I picked the neolithic era and the artist, Marcel Duchamp.

I created five maquettes of what I considered a fair representation of the neolithic heads I saw on the internet for approval to our teacher.  I then saw pictures of Steatopygous female figures (steatopygia: an extreme accumulation of fat on the buttocks) and decided to create a sixth maquette of a steatopygous female torso for myself.  I did not mean to present this but Erin saw it and  liked it so that became the basis of my sculpture. For a piece of “ready-made” art a-la-Duchamp, I thought of the egg-beater that my mother-in-law, Angie Conlon, gave me, then saw one at the Sunday antique market at St. Lawrence Market so it was just a matter of creating the sculpture with the intention of creating a space to add the  “ready-made.”

So first was rendering the maquette into a larger clay sculpture, that then was splashed with plaster and built further to make a strong plaster mold.  The clay was then removed and replaced with cement fondue.  When the cement fondue was hardened and finished, a mixture of cement and epoxy was used to secure the egg beater into the indentation. 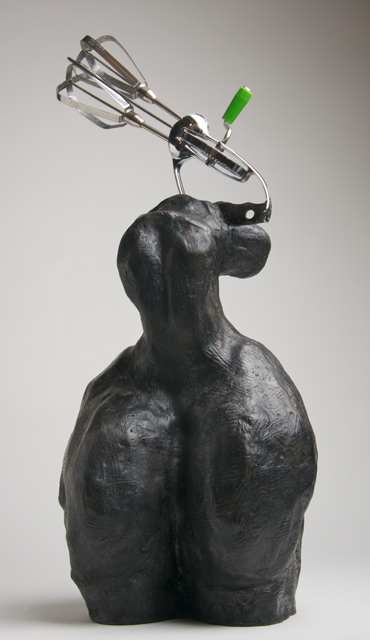 The sculpture was kept locked under glass for a year in the CTS hallway until early in June when they were replaced with new sculptures.

Artist, activist, community organizer now working as a Community Minister for the Davenport Perth Community Ministry of the Shining Waters Region of the United Church of Canada.
View all posts by macconlon →
This entry was posted in Uncategorized and tagged art, CTS, sculpture, Steatopygous, The Art Centre at CTS. Bookmark the permalink.